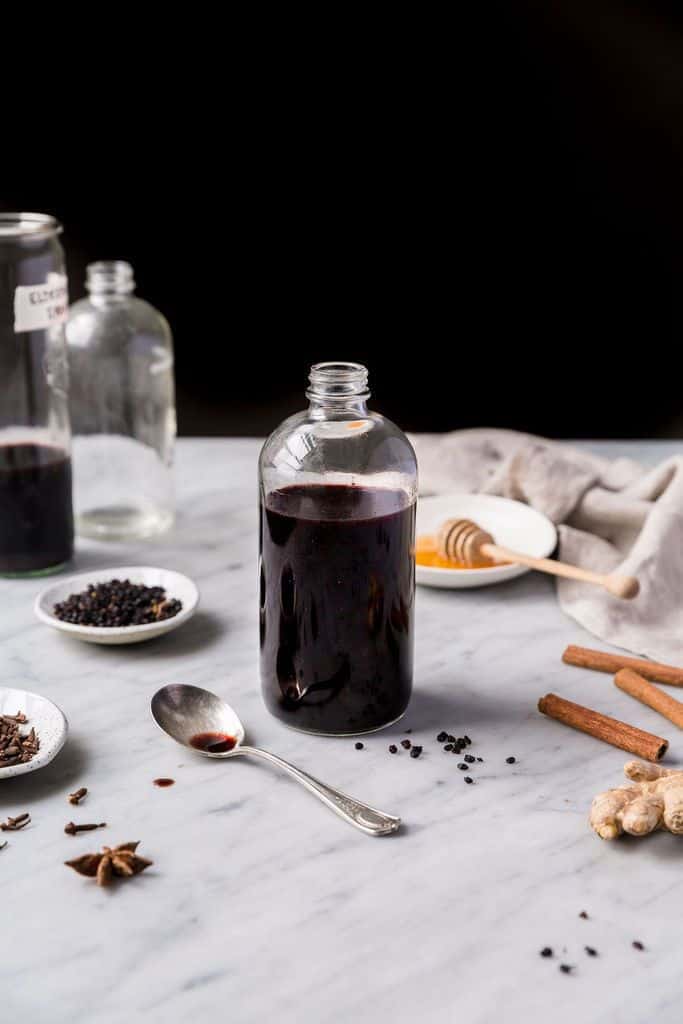 This week instead of regurgitating all the amazing information out there about elderberries and elderberry syrup, I wanted to share with you a blog post that Adriana Ayales, owner of Anima Mundi Herbal Apothecary in Costa Rica and New York wrote. I’m currently taking an indigenous plant medicine class from Adriana (and loving it!), she has so much amazing wisdom to share and I really wanted to spotlight her on this post!

THE IMMUNE PROTECTIVE POWER OF ELDERBERRIES

+ HERBAL ANTIVIRALS THAT YOU NEED TO KNOW!

If there’s ever been a plant that we’re completely enamored by, it’s Elderberry. Did your parents ever try to give you nasty cough syrup like Robitussin or Triaminic? If so, you probably thought to you yourself, “If only there were a tastier alternative!” Well, Elderberry is exactly that. And, not only is it completely natural, but the scientific studies on this plant are undeniable. Aside from its extensive studies, it’s also been revered for eons by traditional cultures for its medicinal properties. Here’s some info that only scratches the surface on this powerful ally.

The genus Sambucus has more than 20 species with similar properties. Our spotlight is on elderberries, also known as the American elder (S. canadensis), which has gained more and more interest for its many health benefits. This bountiful shrub with berries and flowers can grow an impressive 12 feet tall and is commonly found in North America and Europe. This species was regularly used by Native American tribes as a folk remedy for centuries.

According to the writings of Hippocrates (ca. 470-410 BCE), Pliny the Elder (ca. 23-79 CE), and Dioscorides (ca. 40-90 CE), the use of elder as a medicine dates back to ancient times. According to The Journal of the American Botanical Council historically, medicinal uses for European elder could be found in Italian, Dutch, Portuguese, Croat-Slovak, German, Austrian, Swiss, and Hungarian pharmacopeias.

Revered for its exceptional healing gifts across the globe, elderberry boasts its alias as the “medicine chest of the country folk.” It remains a popular medicinal staple with Native American tribes, as well as people in Northern Africa, Asia, and through Europe. The word Elder is derived from “ellar” or “kindler”, because the tubes that formed from the branches were once used as pipes for kindling fires. The botanical name for the Elder, Sambucus, is from the Greek word “Sambuca”, meaning wind instrument. Indeed, there was a panpipe called the Sambuke, which was a musical instrument beloved by the Romans and Greeks. Some Native American tribes also used elderberry branches to make flutes, and the tree was sometimes called “the tree of music.”🌳 🎼

Much enchanted folklore surrounds this shrub, and it has long been considered a very sacred and especially magical plant. Folklore said Elder to have powers so amazing she could protect a dwelling from storms, witches, and goblins. In addition, that Elder could gift one the power of seeing the future, and allow one to glimpse the faeries if you slept under her. The fairy tale by Hans Christian Anderson, “Little Elder Tree Mother,” is the tale of a little boy who has caught cold and is healed by the elder mother, who comes out of the pot of elder tea. It is a great example of the esteem and respect that was once bestowed upon the elder. According to Danish folklore, there is a female elf in the elder tree which leaves every midnight, strolls among the land and fields, and returns before morning.

Similar stories in other European folklore suggest that Elder is an enchanted tree, perhaps a true portal to the faerie realm or an embodiment of a crone witch whom you must respect when harvesting from her or so that she won’t haunt you for the rest of your days. Each story told in folklore speaks to powerful magic, but could be more modernly defined as the need for humans to acknowledge the plant’s power and potent healing abilities. This suggests that people must learn to honor our mother nature who is full of love, kindness, and healing, and can be fierce when disrespected and treated with little value. But fear not. Elder’s healing gifts are truly kind and deep, and perhaps we just need to pay attention to her magnificence.

Elderberry is most famous for its use as an immune booster in the prevention and treatment of colds and flu. And it’s not simply an old wives tale – there is lots of hard data to back it up (albeit small studies, noting that large-scale, randomized-controlled trials are very hard to come by in herbal medicine). Here is some of the evidence found in medical literature for the use of elderberry:

Be Aware! There Are Different Kinds of Elder! Black, Blue, and Red Elderberry

Elderberry supplements – such as syrups, lozenges, capsules, tea, and powder – are all typically made from the European, ‘black elderberry’ (Sambucus nigra). The three other well-known elderberry varieties include the following:

All elderberries are rich in anthocyanins, powerful antioxidants responsible for the red, blue, and purple berry color variations. Although both European and American elderberry abound in antioxidants, the European variety is higher in specific ones (phenolics and flavonoids). Anthocyanins deepen the color of plants, which explains the greater potency of black elderberry, especially compared to the red variety. Red and blue elderberry, native to the North American continent, may offer distinct health benefits. Native people would collect these berries in the summer and store them in a safe place for medicinal use during the winter months. A lot of people have gotten digestive upset from eating the raw red and blue berries. Yet it it important that you extract them in some fashion, whether it’s by boiling them down, or directly extracting in alcohol, or making into jam, or gummies — a sort of processing is key to avoid it from irritating the gut lining.

Elderberry igniting a ‘Cytokine Storm’ in Immune Compromised Diseases
So, what are cytokines anyway? They are chemical messengers used to send signals between cells. They get released by one cell and can bind to receptors of a bunch of different cells causing various effects in the body, some inflammatory, some anti-inflammatory as well as other body and cellular functions. Cytokines are pretty complex, and don’t just have one function, or direction – their effects depend on when they are released, what other cytokines are released with them, what cells they bind to, and much more.

Famous cytokines that you might have heard of include, Interferons (IFN), Interleukins (IL), chemokines, Colony Stimulating Factor (CSF) and Tumor Necrosis Factor (TNF). Some cytokines, like Interferons, have even been used in the treatment of diseases like rheumatoid arthritis and multiple sclerosis.
When an injury occurs somewhere in the body, inflammation sets in – pain, redness, heat, swelling, loss of function – all hallmarks of acute inflammation, and it’s actually a good thing because it helps treat the injury by calling in help. Cells are recruited, blood flow increases, and cells come help out and repair the damage. This all works really well when it’s working properly, but when things go awry, when the inflammation is really severe, uncontrolled, and persistent, bad things can happen.

What is ‘Cytokine Storm?’
If the infection is severe, sometimes this cytokine signal gets stuck in a self-perpetuating loop. It keeps increasing, causing more and more of an immune response. If the immune response gets out of control, it can cause damage to our own healthy cells, sometimes on a large and dangerous scale. This is called a cytokine storm.

What is the Connection Between Coronavirus and Cytokine Storm?
There are many claims that the elderberry can cause a Cytokine Release Syndrome, or CRS– aka “cytokine storm” – painted the medicinal plant as more foe than friend in the battle against COVID-19.
This stems from a study back in 2001 where researchers examined the immune effects of Sambucol, a popular line of dietary supplements containing black elderberry extract. They collected blood samples from 12 healthy donors to analyze changes in cytokine production following the application of four different Sambucol products.
In the Sambucol study, investigations found that the elderberry formulations significantly increased the production of certain proinflammatory cytokines as compared to LPS, a known activator of white blood cells. The greatest cytokine increase occurred in samples treated with the Black Elderberry Extract product.
That said, the Weil Center also acknowledges that for prevention of viral illnesses in general, elderberry remains a good choice. “Elderberry extracts may help to prevent the early stage of coronavirus infections, which includes COVID-19,” its guidelines explain, noting that elderberry contains compounds that make it harder for viruses to infect human cells.

What’s The Bottom Line?
On the other end, there is some evidence that elderberries could have an anti-cytokine effect. In contradiction to claims that it causes cytokine storms, a 2016 study showed that an herbal preparation containing black elderberries exhibited pronounced anti-cytokine activity in patients with vascular disease. The formula successfully slowed the progression of atherosclerosis by inducing a “clinical anti-inflammatory effect, comparable to that of the…NSAIDs” widely used in clinical practice.
To this date, there are still no perfect proven treatments for coronavirus, similar viruses, or immunocompromised diseases. There is still little known about the potential of elderberry and many other anti-viral herbs, therefore it is always wise to talk to someone and maintain an open mind and use critical thinking.

Confession – I don’t love kale. I don’t like it raw anyways, but I LOVE kale chips and…

My food advice today is KEEP IT SIMPLE! We all sometimes tend to overthink meals (very guilty of… 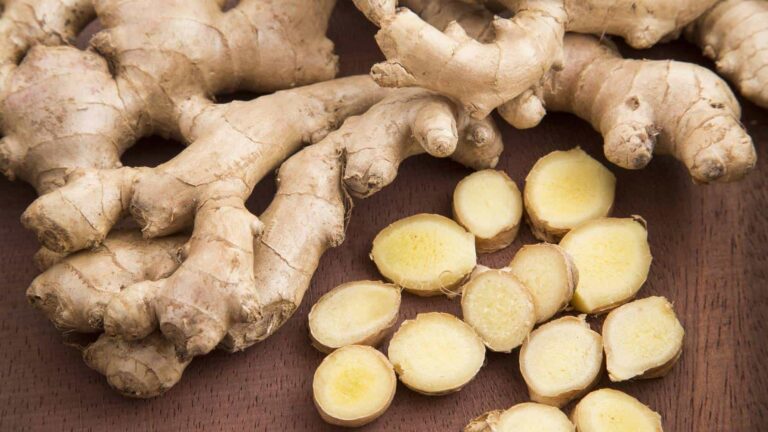 During our most recent workshop, The Quiet Magic of Plant Medicine, we focused on 3 plants – ginger,… 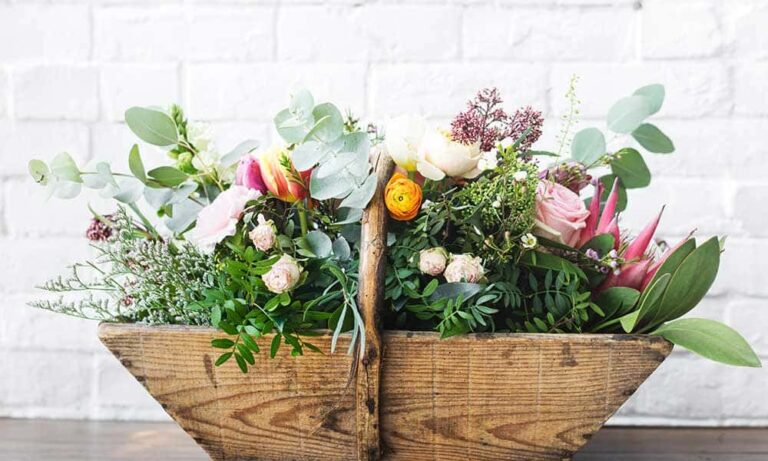 Let’s take two different scenarios of how a day unfolds, both which I’m quite sure you’ve probably encountered…

I’ve tried and failed many times. Many times. There’s just something comforting about coffee to me – and… 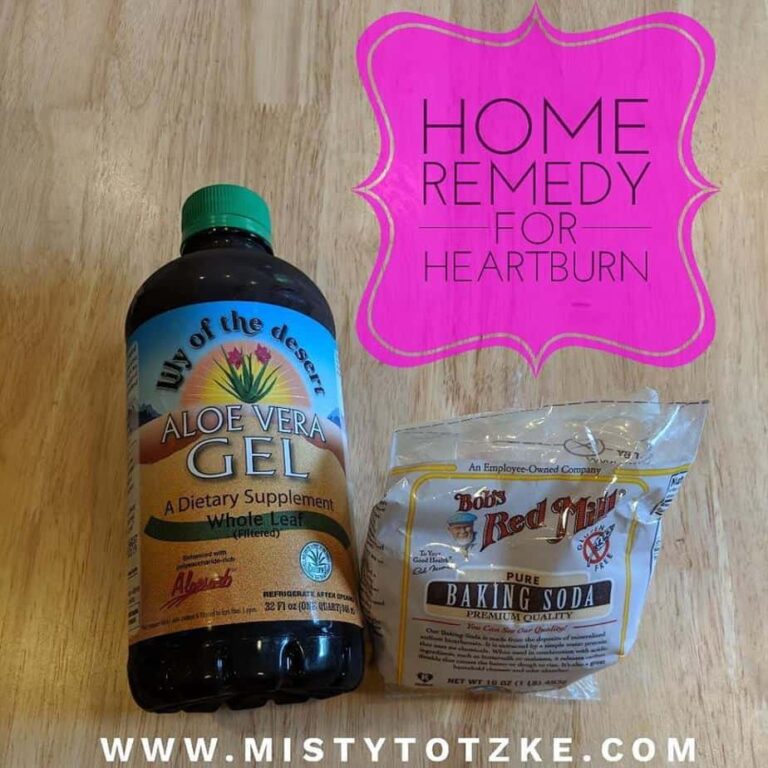